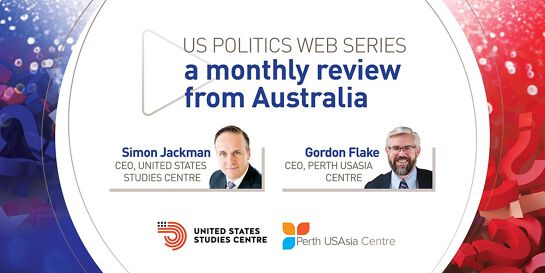 US Politics Web Series - A monthly review from Australia

In this monthly web series the CEO’s of the Perth USAsia Centre and United States Studies Centre will review the latest in US politics with a focus on the upcoming US Election and US-Indo-Pacific relations.

Join Simon Jackman and Gordon Flake in conversation and featuring expert guests for insights covering the top stories in US Politics from an Australian perspective.

Professor Simon Jackman commenced as Chief Executive Officer of the United States Studies Centre in April 2016. Jackman’s research has appeared in the leading journals of political science, in a publishing career spanning thirty years. Between 1996 and 2016, he was a Professor of Political Science and Statistics at Stanford University. Jackman served as one of the Principal Investigators of the American National Election Studies, the world’s longest running and most authoritative survey of political behaviour and attitudes, directing this project over both the 2012 and 2016 presidential election cycles.

His current research focuses on the opportunities and challenges of web-based survey research, the political and scientific consequences of under-representing hard-to-reach populations in social research, and developing methodologies for assessing the partisan symmetry and fairness of electoral redistricting. As CEO, Jackman oversees the policy-focused research of the US Studies Centre, with a special interest in measuring and analysing American and Australian public opinion, studies of investment flows between Australia and the US and comparisons of energy policies in the two countries.

Professor Gordon Flake is the founding CEO of the Perth USAsia Centre at The University of Western Australia. Having built an internationally recognised profile over 25 years of think-tank expertise and leadership in Washington DC, Professor Flake relocated to Perth in 2014 to establish the Centre, and to build a broader world-class Indo-Pacific strategic community.

Professor Flake is one of Australia’s leading authorities on the Indo-Pacific, with a particular specialisation on Korea having spent nearly three decades focused on the Korean Peninsula and Northeast Asia Prof Flake has edited several volumes and authored numerous chapters on developments in the region.