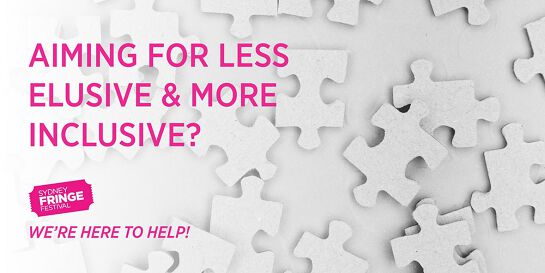 Learn how to increase accessibility and inclusivity in your practice and at your event.

Learn how to increase accessibility and inclusivity in your practice and at your event.

In 2020 The Sydney Fringe, with our friends at NIDA, are expanding our masterclass series, taking it online, and adapting the structure to give you more knowledge for your time and make the most of the online environment.

For 2020 everyone is welcome – wherever you are in the country or around the globe. We know how hard COVID-19 has been for many of your lives, so we’re opening the doors to any artist who’s interested, there’s no condition of being a Fringe registered artist this year.

Bring a tea or a wine and reap all the benefits!

The Sydney Fringe Masterclass Series is presented with the support of NIDA.

Auslan Interpretation is available at all Monthly Meet Ups upon request.

If you require interpretation please indicate this in your RSVP.

All events will include speaker description of visual elements.

RSVP’s: Will close COB the Thursday before each event.

With thanks to Program Partner NIDA for supporting the Masterclass Series

Learn how to increase accessibility and inclusivity in your practice and at your event. We’ll share skills and ideas to ensure that your practice and events are as accessible and inclusive as possible, including how to work with venues around physical access, providing signed or captioned, audio described and relaxed performances, disability representation and access in created development spaces, and inclusivity initiatives for marginalised groups and economically disadvantaged audiences.

Emily Dash – Writer, Actors and Advocate. Emily is an emerging writer, actor and motivational speaker. She graduated from the University Of Sydney in 2013 with a Bachelor of Arts (Sociology) (Gender Studies), achieving First Class Honours in Sociology. In 2016 Emily co-wrote and co-curated “Connect” for Red Door Arts and Ever After Theatre, and is currently developing Ever After’s new show “How to Build A Home”. She also performed in “iDNA” by Collective at PACT centre for emerging artists, and Front Up Emerge’s multi-artform exhibition “I’m Still Here” at The Cutaway Barangaroo Reserve. She joined integrative theatre company Can You See Me? Theatre in 2015, and has written and performed in their productions “The Waiting Room” (2015) and “Water Angel” (2016) at the Sydney Opera House Studio. She was also assistant producer for “Water Angel”. Now called Midnight Feast, the company is currently developing their new show “Chrysalis”. For Beyond the Square Theatre, Emily helped develop and performed in “The Control Room” (2014) and “Mastermind” (2015) at Riverside Theatres. Emily has also professionally collaborated with the Australian Chamber Orchestra for their ACO Move program. Her debut short film “I Am Not A Work of Art” was part of Metro Screen’s 2015 Screenability program. An early development of this piece was exhibited at the 2015 Adelaide Film Festival. Her second film was Can You See Me Theatre’s “The Cards I’m Dealt” (2015), shortlisted for Tropfest Short Film Festival 2016. Emily wrote and starred in both these works. She also wrote a film entitled “Reimagining the Village” for Rozelle Neighbourhood Centre and Maitree House. Her most recent film credit is Johanna Garvin’s short film “The Milky Pop Kid”. Most recently, Emily was one of eight interns selected to participate in Screen NSW’s Screenability program. She will be interning as a writer/researcher with Matchbox Pictures in 2017.

Anthea Williams – Theatre & Film Director. Anthea is an award-winning theatre and film director. She is also a Churchill Fellow and develops both theatre and screenplays.Anthea’s short film Safety Net was part of the official selection for the Sydney Film Festival and was shortlisted for the New Zealand International Film Festival’s Best Short Award. She has worked in development at Causeway Films and Screen Australia.Anthea was awarded Best Director of a Mainstage Production at the Sydney theatre Awards 2017 for Hir. This production won several other awards including Best Mainstage Production. From 2011 to 2017 she was Associate Director – New Work at Belvoir. For Belvoir she directed Winyanboga Yurringa (Andrea James), Hir (Taylor Mac), Kill the Messenger (Nakkiah Lui) Forget Me Not (Tom Holloway), Cinderella and Old Man (Matthew Whittet) Anthea is also an award-winning cabaret director. Since Ali Died (Griffin) won Best Cabaret at the Sydney Theatre Awards 2018 and Mother’s Ruin: A Cabaret about Gin which Anthea co-wrote and directed has toured Australia, the United Kingdom and New Zealand. From 2007 to 2011 Anthea was Associate Director bushfutures at London’s Bush Theatre, where her directing credits include Two Cigarettes, 50 Ways to Leave Your Lover, 50 Ways to Leave Your Lover at Christmas, Turf, suddenlossofdignity.com, and the musical The Great British Country Fete. Anthea’s other directing credits include Sleeplessness (PYT Fairfield), The Pink Hammer (The Court Theatre), The Humans (Mophead and Red Line at the Old Fitz), Flight Paths (National Theatre of Parramatta), The Colby Sisters of Pittsburgh Pennsylvania (NIDA) #KillAllMen (NIDA), The Real You (SmackBang), and Quiet (Fontanel – 45 Downstairs). Anthea is a graduate of the University of New South Wales and the Victorian College of the Arts. She is currently directing Things I Could Never Tell Steven at The National Theatre of Parramatta.

6:15 – 6:45 Representation and accessible performance, with Emily.

6:45 – 7:15 Creating accessible and inclusive creative spaces for artists, with Anthea.