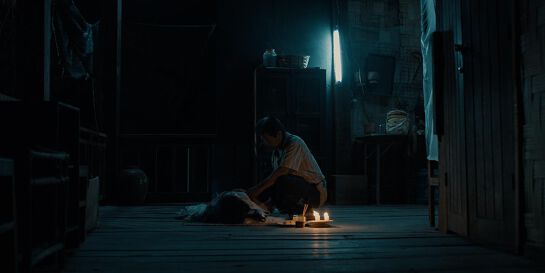 Static Vision are proud to present the Australian premiere of THE LONG WALK, the latest feature from Static Vision favourite Mattie Do - Laos' first and only woman film director - who will be joining the team live, following the feature's free screening, for an extended Q+A.

An old man walks the dusty roads between his isolated farm and the nearby rural village in the company of a silent spirit whose death he witnessed fifty years earlier. For decades, the old man’s regret over losing his mother to tuberculosis has bred a pathological need to ease the suffering of the terminally ill, and over the years, he has quietly euthanized several sick women. As he realizes that his spectral companion is able to transport him back in time, the old man trespasses into his own past to set in motion a plan to convince his younger self to preempt his mother’s terminal suffering.

"While a fascination with guilt, regret, memory and the bonds of memory (all seen through an unapologetically feminist lens) permeates her work, it is in The Long Walk that Mattie Do reveals the depths of her talent, the extent of her humanity and the potential to even further consolidate her status as one of the most important Asian filmmakers working today." - Alexandra Heller Nicholas, AWFJ

"[Mattie Do] shows viewers more about Laos than any documentarian or travel blogger ever has... Do explores Lao family dynamics, class divides, gender politics, and superstition surrounding luck and death. But it’s much more than a socio-academic exercise: [Her films] play with your expectations, draw out the tension of its most suspenseful plot thread, and unleash beautiful but horrifying sequences." - Nathan Mattise, Wired