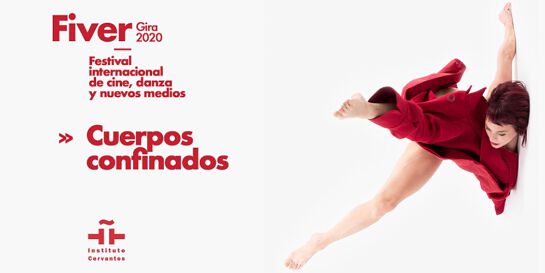 From the 27th of Oct till the 1st of Nov you can enjoy Fiver 2020 - International Film, Dance and New Media Festival Online and Free

From the 27th of Oct till the 1st of Nov you can enjoy Fiver 2020 - International Film, Dance and New Media Festival Online and Free

Fiver, the international platform for the support, exhibition and production of audiovisual dance created in Spain in 2012, presents in its second year of collaboration with the Cervantes Institute a film dance program that shows a selection of pieces of the genre created by Spanish filmmakers, in the that movement is the cornerstone, with an extraordinary curatorial line, in this 2020, around the relationship of the body and the screen in confinement.

Eight works have been selected in this "Confined Bodies" program, curated by Samuel Retortillo, director of the FIVER festival: eight directors have been selected for their works, which are revealed as magnificent actions of hope, adaptation, imagination and creativity and stand out for their collaborative, poetic or testimonial character: Elías Aguirre, Richar Mascherin, Asun Noales, Alex Pachón, Jesús Rubio, Antonio Ruz, Guido Sarli and Pablo Venero.

Book online to receive 8 links to Watch online all works, which are composed by 8 short films (total final duration for viewing all short films is 37 min)

Created during the months of confinement through a virtual encounter with a group of dancers from Washington and Madrid, this audiovisual piece is a compendium of small dances shared using Internet tools. Part of the time that the artists had during those exceptional months in which external limitations made the spaces inside multiply were occupied with them. The title of the work, Ay, amor, what will I do with all this mobility ?, collects the question that hit us hard in those days and proposes a possible recipient for the reflections of the creators, because the brief danced files that they exchanged then they were like love letters.

Videodance coordinated by Álex Pachon (Direccion Fiver Team) in the context of the Dance and Technology subject of the Higher School of Dramatic Art and Dance of Euskadi, where Alex Pachón was a visiting professor, the project coincides with the period of confinement due to the Covid-19 and lasts 10 hours divided into an open masterclass in collaboration with the Atalak project and four sessions of an online workshop with the final year students, in which the possibilities of the union between cinema and dance were discussed and new media while the concept and the realization of the piece were consolidated. Also an active part of the process were the professor of the discipline, Gorka Martín, and the intern Raúl Gil. Inspired by the project of the app called 1 Second Everyday, and based on that language, the videodance tries to create a hypnotic and progressive story that transmits the idea of ​​how four dancers about to graduate lived those strange weeks of national emergency. In addition, a GIF-like rotoscopy and frame-by-frame animation exercise was carried out, the result of which was incorporated into the montage as credits.

Recorded on the afternoon of April 24, 2020 at the La Piedra farmhouse, in Córdoba, during confinement due to the Covid-19 pandemic, its author tells us of this piece: «During the almost three months of isolation on my farm family in Córdoba, surrounded by olive trees, the only video I made dancing was this and it turned out to be very improvised. My body was released for a few minutes in a dialogue with the light, the gloom and the music, from the inside out ».

After many days in the hospital, uncertainty and an emotional roller coaster, Asun Nogales's mother finally returns home: «The need to express and put a little beauty and poetry in this life, leads me to make this video, transparent, with the musical interpretation of my friend and admired cellist Antonio Ballester on the work of Bach and the recording and editing of the video of my partner Germán Antón. An afternoon at home can be inspiring to create new landscapes.

5. Elías Aguirre. The End of the World. The skillful task of circumventing the kidnapping of the movement (3 min short film)

Chosen to participate in the official selection of Choreoscope, International Dance Film Festival Barcelona 2020, Source constitutes an inner journey in search of the source of an identity that is not affected by the mutability of existence.

Underground arises from the sheer need to do something. The possibility of accessing a community garage opens up a new stage space where you can spend your days rehearsing, preparing and waiting for the gate to rise as if it were a great curtain. Underground is a journey to the interior, an emergency exit and an opportunity to rediscover a parked space and time, which becomes a burrow, a refuge and a place to count the days.

Mascherin himself defines his work for us, created in the surroundings of his house and town, seeking a way to share his emotional and physical falls during confinement and then following up with the remains he left behind: «What causes chaos in a landscape-society ordered-a? What is my body like when it becomes chaotic in an organized and meticulous environment? The out of control state will take possession through the body to trespass. How from movement can I transform the fall into a body without return? The inevitability of the fall - caused by the force of gravity - and a mood that affects the vulnerability of the body and, therefore, of the human condition. Going through tragedy and failure. A daily action repeated in different contexts, to fall ».