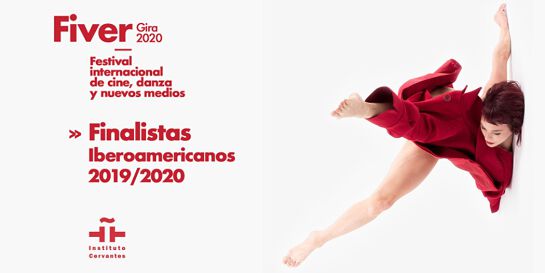 From the 28th of Oct till the 1st of Nov you can enjoy Fiver 2020: Latin American Finalists 19/20 Online and for Free

From the 28th of Oct till the 1st of Nov you can enjoy Fiver 2020: Latin American Finalists 19/20 Online and for Free

The international platform for the support, exhibition and production of audiovisual dance Fiver promotes choreographic-audiovisual creation by promoting the professionalization of the film dance genre with the organization, since 2012, of an internationally renowned annual festival:

FIVER. After the success of FIVER 2019, which celebrated its seventh edition with actions in Logroño and Madrid, its two main venues, this 2020 and for the second consecutive year, the Fiver-Cervantes program is being carried out within the festival, with a Selection of works by Spanish and Latin American creators and curated by Samuel Retortillo, wants to offer a current vision of audiovisual dance through works that have been produced by Fiver or that have been finalists in its international competition.

The works of prestigious Spanish film directors of three generations are a perfect selection to show how cinedance has become a language of specific movement, where the creator brings dance to life through the screen.

There are five works that can be enjoyed at Fiver-Cervantes 2020: the winner of the special FIVER 2019 award, I Love the Maids for Unreal, by Sofia Castro (Argentina); the finalist, Babelian Circles, by Ferrand Romeu, and the collaborative works Fiverlabs 2019, Body to Body 2.0, coordinated by Esteban Crucci and Jordi Cortes, Wine or Grape ?, coordinated by Álex Pachón; and Bailaora, by Rubin Stein.

Book online to receive 5 links to Watch online all works, which are composed by 5 short films (total final duration for viewing all short films is 44 min)

The Wine or grape? proposes this collaborative short film in the key of dance, the result of an express workshop lasting three intensive days, shot in different locations in Logroño and its surroundings during the seventh FIVER edition within the framework of the 2018 festival. The performance is carried out by twelve artists chosen through a national call for aid to training

This short film made in collaboration with the Biennial of the Arts of the Body, Image and Movement of Madrid and with the Ídem / La Casa Encendida festival is focused on choreographic creation and audiovisual dance with participants with and without functional diversity. In the choreographic area, by Jordi Cortés, we worked on listening and collaboration, improvisation and intuition, to highlight the importance of diversity in groups and the dynamics that are created in them when it is enhanced; In the audiovisual area, Esteban Crucci opened his gaze towards the body and the choreographed material, passing through the elements of audiovisual language applied to the discipline of dance. It is not the linear recording of a choreography: the camera investigates movement, in a diverse way and integrating different bodies in such a way that the camera / body link entails a new space / time concept.

Inspired by Augusto Monterroso's The Maids, this humorous short film that shifts between fiction and film dance features a dancer who embodies the voices of two stereotypical radio soap opera lovers who plot to murder her. In a circular sequence shot shot in a theatrical space, a universe of its own is created where the objective is revealed as subjective and the body struggles to represent the intangible. And the question arises: Where is the boundary between what belongs to the mind and what is externalized?

Nominated for a Goya Award for Best Fiction Short Film, with ten nominations for the 2019 Fugaz Awards and selected for the official section of the Chilean Lebu International Film Festival, this 15-minute production is defined in three words: A war. A girl. A dream.

Babelian Circles is an immersive and hypnotic piece where music and dance trace a sinuous journey through a solemn desert landscape with a surprising and cryptic plot: «I walked a path alone. I witnessed the silence of the landscape. I measured space with gestures and circled time. I melted my feet on the ground and raised my arms to the sky. I became a tiny ant and disappeared before the eyes of the world. FIVER DANCE Festival (Madrid) (2019)