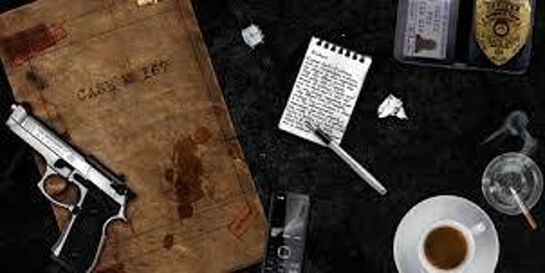 Crime fiction, detective story, murder mystery, mystery novel, and police novel are terms used to describe narratives that centre on criminal acts and especially on the investigation, either by an amateur or a professional detective, of a serious crime, generally a murder.[1] It is usually distinguished from mainstream fiction and other genres such as historical fiction or science fiction, but the boundaries are indistinct. Crime fiction has multiple sub-genres, including detective fiction (such as the whodunit), courtroom drama, hard-boiled fiction, and legal thrillers. Most crime drama focuses on crime investigation and does not feature the court room. Suspense and mystery are key elements that are nearly ubiquitous to the genre.

Join Verushka Byrow: editor and blogger and crime/thriller fiction enthusiast as she talks to authors Benjamin Stevenson, Sharon Doering and Chris Hammer about their published works, how to write a crime novel and to answer any burning questions you may have…

Book your free ticket so you can join us by Zoom!

Benjamin Stevenson is an award-winning stand-up comedian and author. His first novel, Greenlight, was shortlisted for the Ned Kelly Award for Best Debut Crime Fiction, and published in the USA and UK. He has sold out shows from the Melbourne International Comedy Festival all the way to the Edinburgh Fringe Festival and has appeared on ABCTV, Channel 10, and The Comedy Channel. Off-stage, Benjamin has worked for publishing houses and literary agencies in Australia and the USA. He currently works with some of Australia’s best-loved authors at Curtis Brown Australia. His most recent novel is Either Side of Midnight.

Sharon Doering lives in the Chicago area with her husband, their three kids, and a peculiarly civilized dog, Indy. In her other life, she was a science professor, a biotech stock analyst, and a xenotransplantation researcher. She has also been a good waitress, a mediocre bartender, and a terrible maid. SHE LIES CLOSE is her debut psychological thriller.

Connect with Sharon after the panel:

Chris Hammer is a leading Australian crime fiction novelist, author of international bestsellers Scrublands and Silver.
His new book, Trust, will be published in Australia and New Zealand in October 2020 and internationally from early 2021.
Scrublands was an instant bestseller upon publication in 2018, topping the Australian fiction charts.
It was shortlisted for major writing awards in Australia, the UK and the United States. In the UK it was named the Sunday Times Crime Novel of the Year 2019 and won the prestigious UK Crime Writers’ Association John Creasey New Blood Dagger Award.
Scrublands, Silver and Trust all feature troubled journalist Martin Scarsden and his partner Mandalay Blonde.
The books are notable for their atmospheric Australian settings, range of colourful characters, intricate plots, descriptive language and emotional depth.
Before turning to fiction, Chris was a journalist for more than thirty years. He reported from more than 30 countries on six continents for SBS TV. In Canberra, roles included chief political correspondent for The Bulletin, senior writer for The Age and Online Political Editor for The Age and The Sydney Morning Herald.
Chris has written two non-fiction books The River (2010) and The Coast (2012), published by Melbourne University Press.
He has a bachelor’s degree in Journalism from Charles Sturt University and a master’s degree in International Relations from the Australian National University. He lives in Canberra, Australia.