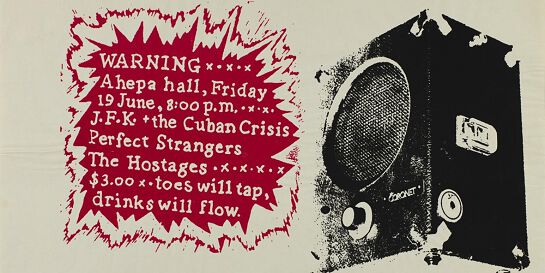 Join Dr John Willsteed in conversation with artist and producer Gary Warner, as they discuss the stories behind Gary's featured work.

Join Dr John Willsteed in conversation with artist and producer Gary Warner, as they discuss the stories behind Gary's featured work.

Remember your first Brisbane gig? Step back into Brisbane’s lively underground music scene of the 1970s and 80s with Dr John Willsteed as he interviews Gary Warner on his memories and his work featured in Cut Copy: Brisbane music posters 1977-87.

This event will be available on our website here and we encourage you to join the conversation online using #slqcutcopy and @slqld.

John Willsteed is an Australian musician and sound designer. As a musician, he is best known as a member of Brisbane band The Go-Betweens, in which he played bass guitar 1987–1989. As a sound designer he won Australian Film Institute awards for his work on The Beat Manifesto (1996), Vietnam Nurses (2005, as composer) and Rare Chicken Rescue (2008). He is a lecturer in Music at QUT and was awarded the inaugural Letty Katts Award in 2016. John has provided curatorial advice for Cut Copy.

Born in Brisbane in 1957, Gary Warner is an artist, photographer, writer, curator, musician and media producer. He works across various visual media and was intimately involved with the art and music scene in Brisbane in the late 1970s and early 1980s producing music, film, expanded cinema events, curating exhibitions for artist-run galleries. Gary co-created with Dr John Willsteed several of the posters featured in the exhibition.

Subscribe to be the first to know about our future events.

We respect your privacy. Personal information we collect is used only for our internal activities and functions (Libraries Act 1988 (Qld)) and will not be disclosed unless required by law. For more information, please read State Library's privacy statement.

The views expressed by the speakers are their own and the promotion of products/services is not endorsed by State Library.