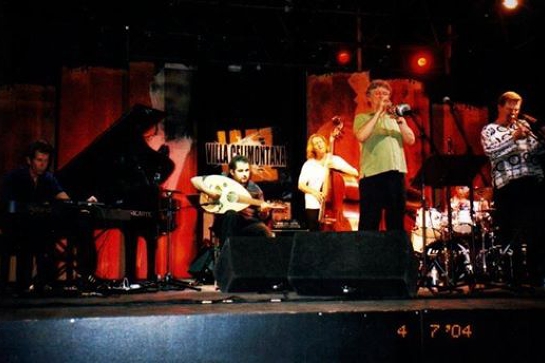 Wanderlust first appeared on the jazz scene in 1991 and quickly established a profile as an exciting and innovative group.

Their music is fresh and original combining jazz improvisation with the diverse rhythms and melodies of global music.

Led by Miroslav Bukovsky, long recognised as one of Australia’s best trumpeters and composers, Wanderlust has attracted international attention resulting in appearances at many of the major European jazz festivals.

Their debut CD ‘Wanderlust’ won the Best Jazz Album ARIA award in 1994. Subsequently they have released four highly acclaimed albums, ‘Border Crossing’, ‘Song and Dance’ ‘Full Bronte’ and their latest offering, ‘When In Rome’. Wanderlust brings together the talents of six of Australia’s best jazz instrumentalists. Together they have developed a unique sound through highly original compositions, superb ensemble work and imaginative improvisation and interplay. Skillfully blending global beats with jazz improvisation, the emphasis is on composition, texture and mood, rather than display of individual virtuosity. This is music to win hearts and both in Australia and worldwide, they have captured audiences and critics alike with their joyous, exhilarating music and infectious rhythms. Wanderlust brings together a collection of musicians whose individual work has gained them many accolades. This is a great band, a six-piece lineup that really fires with energy.