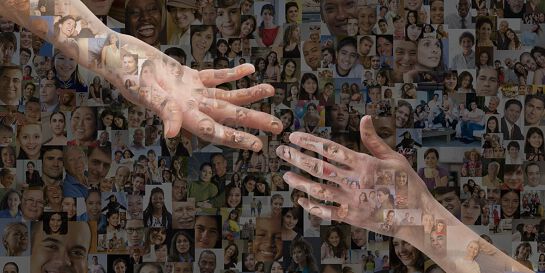 #Help: The Digital Transformation of Humanitarianism and the Governance of Populations

#Help: The Digital Transformation of Humanitarianism and the Governance of Populations

The QUT Global Law, Science and Technology Seminar Series aims to bring together national and international speakers who will explore the personal, societal and governance dimensions of solving real world problems which are influenced by, and through the interactions of science, technology and the law.

The series will host speakers who think about ‘technology' and ‘science’ as broadly construed to refer to methods of framing or interacting with the world, and that enable the critical and imaginative questioning of the technical, science, environmental and health dimensions of law and life.

In this fourth seminar of our series, we will hear from Professor Fleur Johns who will discuss how international humanitarianism is taking on new imperatives, protagonists, investments, techniques and objects of inquiry in connection with the expanding reach of the digital.

Abstract: Like many other areas of work, international humanitarian practice and thinking are being transformed by digital technology and associated socio-technical practices. Institutional developments within the United Nations (UN) are telling. Just over ten years ago, the UN Secretary General announced the launch of the UN Global Pulse project, dedicating to enabling, showcasing and promoting the “scaled adoption of big data innovation for sustainable development and humanitarian action”. This project has since been advanced through Pulse Labs in Jakarta, Kampala and New York and one soon to be set up in Samoa. Other cognate initiatives have been launched throughout the UN system. Prominent, international public-private collaborations aim to harness digital technology for humanitarian ends: initiatives such as the Global Partnership for Sustainable Development Data. And more or less every major technology company across the world is investing in the humanitarian field: Facebook’s Data for Good initiative; Google.org’s Crisis Response work; and Alibaba’s collaboration with the World Food Program to develop Hunger Map LIVE are indicative examples. International humanitarianism is taking on new imperatives, protagonists, investments, techniques and objects of inquiry in connection with the expanding reach of the digital. Given the centrality of humanitarianism to the way that the international plane has been imagined, regulated, materialised and militarised throughout the 20th and 21st centuries, these shifts are worthy of close attention.

This talk will present one part of a book project emerging from socio-legal inquiry along these lines, ongoing for several years. This inquiry has focused on the work, collaborators and interlocutors of Pulse Lab Jakarta (part of the UN Global Pulse initiative referenced above). This talk concerns one shift that appears to be nascent within this sphere – a shift with potentially very significant social, political and legal ramifications. In this so-called “digital humanitarian” context, the statistical artefact of the population may be undergoing something of a declension, comparable to that which the family underwent at an earlier historical moment. This would render the population an ‘interior’ dimension of the social formation, while governmental attention may be preoccupied, in the first instance at least, with eliciting and addressing something else: a succession of digital aggregates – many of them still only proto-typically formed – that are called to stand in for the population as an object of primary concern, inquiry, representation and governance. How might such a shift be reconciled (if at all) with influential accounts of the ends characteristic of national and international governance from late modernity onwards (most notably Foucault’s account of biopolitical governmentality to which so many scholars have turned in analysing the global digital economy and its politics)? What might such a shift demand of practitioners, beneficiaries and infrastructures of humanitarianism and make of the contested ideas of international social and legal order that it underwrites? This talk puts forward some preliminary observations and provocations addressing these questions.