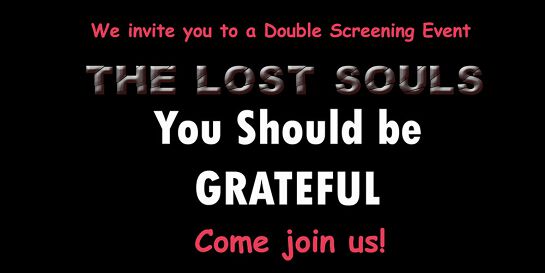 You Should be Grateful and The Lost Souls screening

We invite you to join us for this special online screening event. Multi award winning films, The Lost Souls and You Should be Grateful.

Join producer/director, Heather Waters, in an open discussion about the making of the films and the effects of adoption. Make sure you have your tissues, some water and a support person close by if needed.

0930am intro and welcome into the online cinema

1010am You Should be Grateful

A not to be missed event for anyone touched by adoption.

Sarah is 16, pregnant and unwed. In an era where this is frowned upon, closed adoption seems the only answer. Sarah is forced into the system of barbaric and inhumane treatment, only to receive a formal apology nearing the end of her life.

Based on actual accounts, The Lost Souls is set in 1968 and tells the harrowing tale of what it was like to be young, pregnant and unwed. It reflects the policies, practices and treatment of the governments' of the time and the views of society.

You Should be Grateful ~ short Doco

You Should be Grateful reflects the issues and experiences of what life is like as an adopted person.

In Feb 2018, a group of adoptees attended a Getaway, some meeting for the first time, where they opened up and shared their personal stories and experiences. Shortly thereafter, some were interviewed to reveal the hardened truths and myth busters of what it's really like to live a life that's pivoted around being adopted.