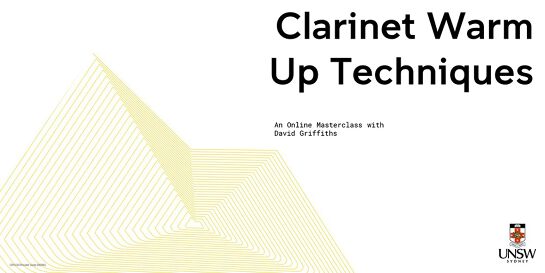 David Griffiths will be presenting part two of his online workshop series open to all clarinetists.

David Griffiths will be presenting part two of his online workshop series open to all clarinetists.

Back by popular demand, Australia Ensemble UNSW clarinetist David Griffiths will be presenting part two of his online workshop series open to all clarinetists designed to take you through a series of warmup exercises to help you develop your breath support, tone, articulation and finger technique.

Get your clarinet out, find a nice room and play along with David via Zoom.

David Griffiths is a member of two of Australia’s leading chamber music ensembles, the Australia Ensemble UNSW and Ensemble Liaison. He also holds the position of Senior Lecturer in Music (Clarinet) and Coordinator of Chamber Music at the Melbourne Conservatorium of Music, the University of Melbourne. A passionate educator and performer, he has presented masterclasses and workshops in Asia, Europe, United States, the Middle East and Australia.

As a member of Ensemble Liaison, he curates and performs an annual three-concert series at the Elisabeth Murdoch Hall at the Melbourne Recital Centre which is currently in its 14th season. He has also performed with the New Zealand, Goldner, Tinalley, Arcacia, Flinders and Australian String Quartets, the New York Wind Soloists, and the Southern Cross Soloists. He has collaborated with many leading artists including Nemanja Radulović, Ray Chen, Anthony Marwood, Henning Kraggerud, Emma Matthews, Cheryl Barker, Peter Coleman-Wright, David Jones, Paul Grabowsky, Tony Gould, and has appeared at the Australian Festival of Chamber Music in Townsville, Port Fairy Festival, Lucerne Festival and the Pacific Music Festival in Sapporo, Japan.

Some recent highlights include a performance of John Adams’ Gnarly Buttons Clarinet Concerto with the Australia Ensemble@UNSW, a collaboration with accordion virtuoso James Crabb and a performance of Mozart’s Clarinet Quintet and Concerto at the 2017 3MBS Mozart Marathon.

David’s recordings with Ensemble Liaison of Messiaen’s Quartet for the End of Time for the Melba Recordings label and Trios of Brahms, Beethoven and Bruch for the Tall Poppies label have won high praise from critics around the world.

Originally from Armidale NSW, Australia, he studied at the Canberra School of Music with Alan Vivian before completing his Master of Music from the Manhattan School of Music under the direction of Alan Kay, David Krakauer, Charles Neidich and Ricardo Morales. He is a Backun Clarinet performing artist.