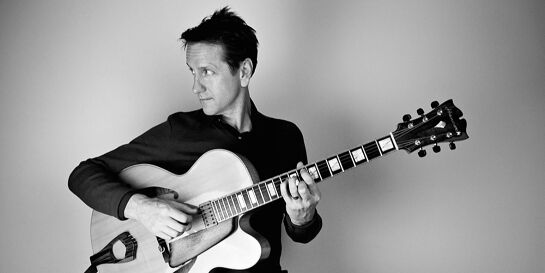 A Sunday Summer teaser before we kick off our 25th anniversary Jazz Festival. We are delighted to announce a special one off intimate performance with Melbourne based guitarist James Sherlock, featuring special guests Nadira Farid & Ben Brinkhoff.

James has an ongoing duo project with vocalist Kristin Berardi, the duo have toured extensively throughout Australia as well as Indonesia, South America, Japan, North America and Europe, which culminated in a performance on the Stravinski stage at the Montreux festival opening for George Benson and Al Jarreau. James also accompanied Kristin when she was awarded the 2007 Freedman Fellowship at the Sydney Opera House, and their second CD “If You Were There” won the Bell award for best jazz vocal release in 2010.

“Sherlock is a wonderful guitarist, and a craftsman of songs possessing beauty and depth. Solo should make a few Top 10’s of the year and help propel Sherlock onto the bigger stage he surely deserves. Definitely a name to watch out for.”